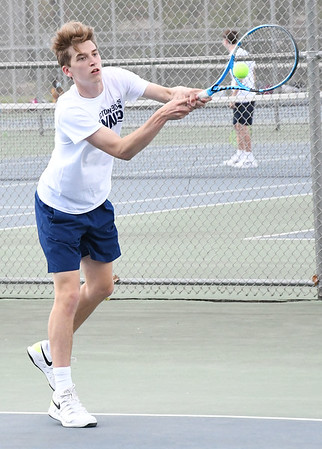 NEWINGTON – The Newington boys tennis team extended its win streak with its 7-0 win against New Britain on Wednesday. The Nor’easters have now won five straight following the victory over the Hurricanes.

“It’s like the end of four years here so it’s kind of special for me to just be playing this season,” Utter said.

“It’s really great that we have it this year,” Davis said. “We just have to be really appreciative of the seniors we had last year because they didn’t get to come out here and play like this. Each game, no matter how competitive it is, is really important.”

“It’s always a good match playing Newington and Don Lukowski,” Hurricanes coach Joe Vaverchak said. “We go way back. Our kids just always have a really good match out here. I think my team is quite young, inexperienced, but I think they’re gaining, they’re growing and there was some good play out there today. I’m pleased how the kids have progressed in a really short period of time and look forward to the rest of the season.”

In doubles action, the Nor’easters first pair of Aaron Hober and Nyle Hopping took care of Tomas Portillo and Ron Burgoin 6-0 and 6-0. The second duo of Shivam Patel and Shiven Patel sidestepped Alex Dementyev and Collin Skutnik, 6-1 and 6-0. Lastly, the third pair of Sami Khan and Ofori beat Cameron Ostrout and Phinias Root 6-0 and 10-4.

Returning only two players with prior experience, New Britain nearly couldn’t field a team this season. However over time, Vaverchak was able to recruit more kids to bring the roster total up to double digits.

At four wins on the season already, the Hurricanes are competing and hope to build their program back up to what it once was.

“We got a couple [matches] this week and a couple next week and hopefully get these kids involved in some summer activities and build on the program,” Vaverchak said. “It’s been tough. Covid had an effect on us, we started the season with basically two players and we built up to 12. I’m pleased with the kids, we got a great group of kids. Playing tennis is a good time whenever.”

The Hurricanes currently hold a 4-6 record and will host RHAM on Thursday at 3:45 p.m.

Newington now boasts a 8-2 record with its two losses coming against Glastonbury and Hall.

“It’s a good season for us,” Utter said. “As a team we’ve lost twice, but otherwise we’re doing better than we have in other seasons. I think we’re clicking as a team now.”

The Nor’easters will head to Avon on Thursday for their next match, with it set to begin at 3:45 p.m.