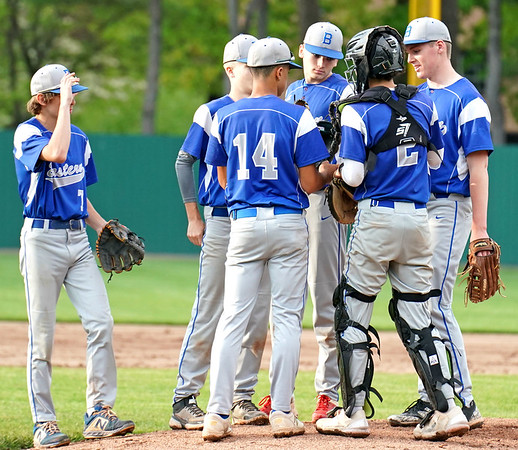 The Bristol Eastern baseball team gathers at the pitchers mound during its game against East Catholic on May 17. | Dan Heary Buy this photo
Published on Wednesday, 26 May 2021 23:10
Written by

BRISTOL - Bristol Eastern scored four runs in the bottom of the sixth inning, and went on to defeat East Hartford 6-3 on Wednesday afternoon at Muzzy Field. Eastern is now 6-13, while East Hartford falls to 8-11. Eastern is scheduled to play Bristol Central Thursday night at 6:30 at Muzzy in the regular season finale for both teams. Both teams will begin play next week in the CIAC Class L Baseball tournament.

Both teams scored a run in the first inning and East Hartford's Jacob Carrion gave the Hornets a 3-1 with a two-run home run over the right field fence in the third inning.

Eastern picked up an unearned run in the fourth to cut the lead to 3-2, and then scored four in the sixth on just one hit to take the lead. An infield error and a walk put two Eastern runners on to start the sixth and a wild pitch moved the runners up to second and third. Tyler Stickels singled to left to score both runners and give BE a 4-3 lead. Two more runs scored in the inning, the first on a double steal and then another infield error scored the final run.

Jaydon Churchill pitched the first six innings for Eastern, allowing four hits, three runs, three walks and striking out three. Churchill was strong in the middle innings, retiring the side in order in the fourth, fifth, and sixth. When the first two batters reached base in the top of the seventh, Brayden Moore relieved Churchill, and got the final three outs.

Eastern had only three hits for the game, singles by Trevor Nohilly and Churchill in the third, and Stickels' single in the sixth.

Newington 10, HMTCA 5: Senior Brandon Baglan was the winning pitcher in the Nor’easters’ final contest of the season, finishing the year 15-5.

Newington scored four runs each of the first two innings and led 8-3, highlighted by a two-run home run from junior Shaun Callahan to the upper deck in right field. Both teams added two more runs over the remaining innings as the Nor’easters finished with 10 hits and four errors while HMTCA notched two hits and five errors.

Newington will await is first-round matchup in the Class LL state tournament next week.

Plainville 14, Terryville 7: The Blue Devils piled on 14 runs in the first four innings to build an insurmountable lead over the Kangaroos.

Junior Samantha Thompson led the way offensively for Plainville with three RBI, the same as Terryville junior Bella Crapo. Terryville struggled defensively, making five errors on the day while Plainville made only two.

Senior Kayla Wisz allowed 10 hits in her six innings of work over Terryville, striking out nine.

New Britain 3, Bulkeley 0: The Hurricanes earned their third win of the season behind 14 kills and six digs from Anthony Olmeda, defeating Bulkeley for the second time this season.

New Britain will close out its season Thursday at home against East Hartford.

“Joey showed grit and determination out there today, he didn't let being down dictate the match. He kept his composure, and battled back to help the team get a win today,” Central coach Jeremy Sloate said.

Seth Sam-Brew locked in his first win at the singles position as well with a competitive match, winning the first set 7-5 and taking the second set 6-3.

“I am extremely proud of this group of kids,” Sloate said. “They have grown so much this season and the last few weeks have been proof of that. We are still a very young team and I am extremely excited about the future of this program.”

The CCC girls golf championship took place Wednesday at the White Course at Tunxis Country Club and Hall finished on top, shooting a 349. Newington took third place with a 397, Berlin finished fourth at 406, Plainville came in 14 with 469 strokes and New Britain posted 578 in 15th place.

Southington’s Brooke Zajac was the highest scoring local player, shooting an 87 over 18 holes. She was followed by Berlin sophomore Kenna Roman who shot an 88 and Plainville junior Julia Smith with a 91.

Newington senior Madison Massaro-Cook and freshman Glorianne Pinote tied for 13th place with scores of 95 and freshman Mia Theriault was not far behind at 99.