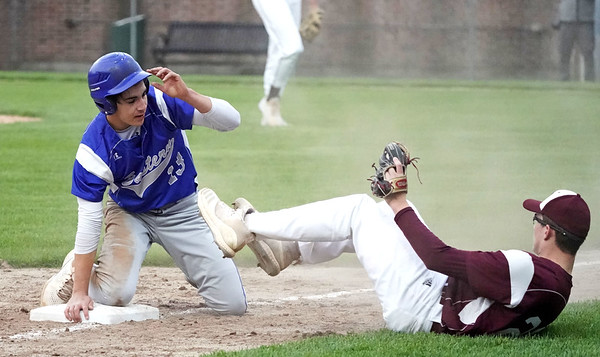 Bristol Eastern senior Andrew Lozier, left, is thrown out at third base during the Lancers' matchup with Bristol Central on May 6. | Dan Heary Buy this photo
Published on Thursday, 27 May 2021 21:57
Written by

BRISTOL – Andrew Lozier pitched Bristol Eastern to a 3-2 win over Bristol Central in the regular season finale for both teams.  Eastern finishes its season with a 7-13 record, having won five of their last six games, and fourth win in a row.  Central finishes at 9-6, playing in their first game since May 12.

Eastern's Lozier and Central's Mike Lorenzetti locked into a pitcher's duel as Lozier threw a complete game, allowed seven hits, walked three, and struck out four, while allowing one earned run.  Lorenzetti pitched into the fifth inning when he reached the pitch limit and had to leave the game.  Lorenzetti allowed four hits, walked three, and struck out 12 batters in 4 2/3 innings of work, allowing the three runs, none of which were earned.  Eleven of the first 12 BE outs were strikeouts by Lorenzetti, including two strikeouts to end the fourth on just six pitches following a two-out triple by Tyler Stickels.

Central took a 1-0 lead in the top of the second.  Lorenzetti tripled to right, and scored on a ground out by Frank Spirito.  Eastern came back with a run in the bottom of the second as Ryan Fradette opened the inning with a single to center, stole second, and scored when Ben D'Amato's single to left was mishandled by the left fielder.

Game remained tied until the bottom of the fifth.  Eastern's Trevor Nohilly opened the BE fifth by singling to left.  Jaydon Churchill sacrificed Nohilly to second.  Tyler Martin reached on an infield error, runners on first and second.  Lorenzetti walked Lozier to load the bases, got the second out on a strikeout, but then reached his limit for pitches and had to leave the game.  Frank Spirito relieved, and walked the next two batters, forcing in two runs.  Sean Wininger relieved and got the final out of the inning, Eastern now leading 3-1.

Central threatened in the sixth as Lorenzetti singled inside third to open the inning.  A hard comebacker by Spirito was thrown away at second, runners now on first and second.  Two fielder's choices resulted in two outs, the second an excellent backhand stop by shortstop Cole Latko who forced the BC runner at second.  An infield single by Roberto Cruz loaded the bases, but the inning ended on another fielder's choice.

Central threatened again in the seventh.  A one out single to left by JT Clark, followed by a two out single by Lorenzetti to left center put runners on the corners, but Lozier got the final out on a flyout to center.

Lorenzetti, in addition to pitching well, was perfect at the plate, going 4 for 4, a triple and three singles, and scoring both BC runs.

Bristol Central 14, Windsor 0: Alex Sciarretto threw a two-hitter in Bristol Central’s win over Windsor in the first round of the CCC Softball Tournament.

Windsor, the No. 3 seed, had trouble getting its offensive game going with Gwen Torreso, Sophia Torreso and Laird posting solid defense.

Bristol Central will play No. 2 Southington Friday at 3:30 p.m.

The hosts led 10-1 after two innings and didn’t look back, smacking 15 hits in the contest.

Southington 3, Hall 0: The Nor’easters remained sharp in its victory in the CCC Tournament quarterfinal match.

Newington won each set by at least a 10-point margin, including an impressive first game in which it won, 25-9.

The Nor’easters advance to the CCC semifinals at Simsbury on Friday.

Both teams traded set wins as Southington won the even-numbered games while the visitors took the odd-numbered sets, including the decisive final frame.

The Blue Knights have now lost two straight after falling to Newington, 3-1, on Wednesday.

Mitchell Messina had 35 aces and 10 digs for Southington and Connor McInnis recorded 18 kills and 19 digs.

The defeat puts the Blue Knights to 16-3.

Cheshire 148, St. Paul 164: Mia Hidalgo was the medalist in the Rams victory over the Falcons at Westwood Golf Course in Farmington, shooting a 35.

New Britain 194, Bloomfield 218: The Hurricanes were led by Xavier Goode’s 36 in the victory at Stanley Golf Course.

Thursday’s match was Goode’s sixth straight medalist finish while Matt Skutnik posted a 39 and Bryce Wasik finished with a 49.