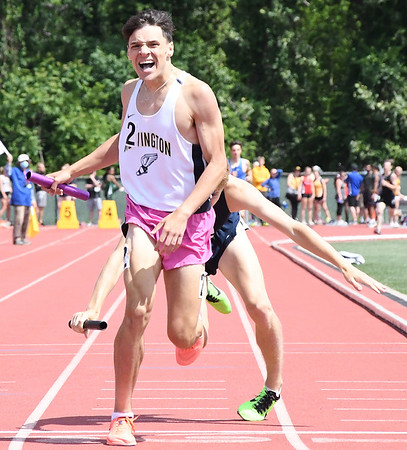 When the baton was handed off to Newington‚Äôs Sam Geisler in the 2021 CIAC State Open Track and Field meet‚Äôs 4x800, he was 15 feet off the pace of Staples anchor George Lepska.

Passing the ringing bell for the final lap, Geisler planned his move. Entering turn three, he made it.

Entering the final turns before the home stretch Geisler moves around Lepska, but never quite had the separation you‚Äôd see from someone who still has plenty in the tank. Instead, the two remained shoulder to shoulder, not out of reach from each other.

Down the home stretch, eying the finish line, Geisler pulled out ahead by the length of his body. In the final 20 yards, Lepska made a final kick to try and get ahead, but stumbled his way to the line, falling across as he finished.

By then, Geisler was across, letting out a yell and a fist pump to celebrate as he turned to look at the time.

The time to beat before the second heat started was 8:12.18 of New Milford. The win of the heat not only guaranteed the Newington boys would go home winning something, but it also guaranteed they would go home State Open champions with a time of 7:57.79.

‚ÄúWe‚Äôve been running together for about three years,‚Äù said Geisler. ‚ÄúThe 4x800 started really coming together this year. ‚Ä¶ We always had the confidence, ... we had lost conference, and after that we came for blood.‚Äù

A group that started running in the order of Michael Bohlke, Luke Brown, Reed Campbell and Geisler for the first time all season just last week was something Bohlke felt was fitting to their strengths.

‚ÄúAt states and that race was the only time we had that order,‚Äù said Bohlke, the leading runner of the tandem. ‚ÄúI run best when I‚Äôm first and these guys are perfect in the middle. You saw it in the last lap, Sam‚Äôs last leg is something to behold.‚Äù

Going through Geisler‚Äôs head as he closed in on Lepska and made his move was how badly he wanted to win for himself and for his teammates.

‚ÄúI know how bad I want this, but I do better in team events. These are my boys. We all want it together,‚Äù said Geisler.

Also going through his head was the thoughts of his mom, who had passed from cancer.

‚ÄúShe was wishing she could come to graduation, and she didn‚Äôt make it to graduation‚Äù said Geisler, getting emotional. ‚ÄúI wanted to win this for her. ‚Ä¶ We were going for the win, we didn‚Äôt care about the time. [Winning the title] was just the icing on the cake. We wanted that.‚Äù

Seeing Geisler‚Äôs emotions come out post-race made the moment all more powerful for Newington.

‚ÄúWe all love each other. Every day we come to practice, we have a great time,‚Äù said Brown. ‚ÄúWe love running with each other and love pushing each other. ‚Ä¶ As Sam said, this is icing on the cake. ‚Ä¶ We came and blew away everyone‚Äôs expectations at class states and did the same thing at the Open. It just feels so good, being the underdog, coming in to win it all.‚Äù

For the rest of the day, after opening with the win, the Newington boys tapered off.

The Newington boys finished the day with 13 team points, finishing tied for 18th in the field with Windsor and Daniel Hand.

One girl runs for Newington

Katie Bohlke‚Äôs time of 2:25.46 was the only time registered by a Newington girl Thursday at the 2021 CIAC State Open Track and Field meet.

She finished 18th in a 21-runner field. She was the second fastest freshmen in the event, behind fifth-place Zoie Kempf of Seymour.