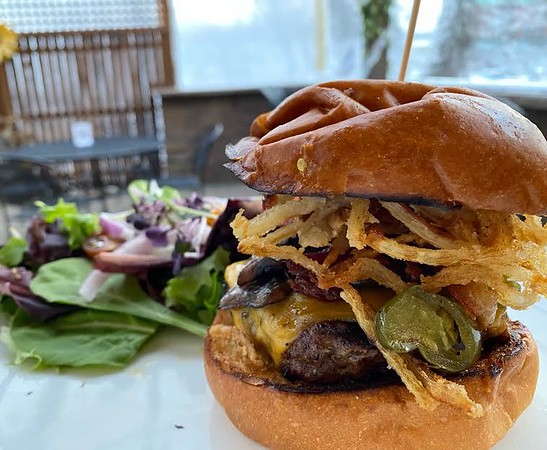 SOUTHINGTON – With seating expanding as covid-19 restrictions ease, Hop Haus has opened its patio for outdoor dining at the Southington location and plans to do the same soon at the new, Plainville location.

“The patio is open at our Southington location and it has been pretty full,” said Miller. “We just had a big party last weekend where we reserved the lower section. The patio in Plainville will be opening next month.”

Miller added that the Plainville location will open a banquet room in late May to host bereavements and private parties for 25 to 40 people as well as an array of beer and wine dinners.

“In addition, Hop Haus Plainville will be starting summertime Sunday brunches in June with a menu featuring local products for its food, as well as unique cocktails to enjoy in the beer garden,” said Miller.

As of May 19, with the governor lifting capacity restrictions, Miller said that he aims to expand available seating incrementally.

“Hop Haus' stance has always been safety first,” said Miller. “We're not going to go too much over where we’re currently at with social distancing at first. We won’t just start packing people in. Our main goal is to keep staff and customers safe. We plan to re-open in increments. We’ll be expanding seating by about 20% on May 19.”

Hop Haus opened in February 2013 as a craft beer bar in downtown Plantsville in Southington.

“After several years we went through an extensive remodeling- adding a beautiful stone beer garden, and expanding our kitchen to accommodate a focus on farm to fork food & specialty cocktails,” said Miller.

During Covid, Hop Haus was forced to close along with many other businesses. However, Miller said that Hop Haus switched its focus to transition to takeout in order to ensure the safety of customers and staff.

“Once we were able to once again open up our patio in June, our dedication to safety, service and quality, quickly helped Hop Haus become one of Southington's top rated restaurants,” said Miller.

The Plainville location, which is twice the size of the Southington location, opened in late March of this year. Miller said that this 6200 square foot casual craft eatery and taproom hosts 120 seats inside and a “beautiful” 40 seat patio. Parking is available in the lot behind the building or on street.

“Hop Haus Plainville is keeping with tradition to Southington with a great selection of food, craft beer and cocktails,” said Miller. “We feature 20 competitively priced domestic beers in addition to our extensive craft selection and even prosecco on tap. Our focus is on hard to find brews from the top breweries in New England that you can't find anywhere other than Hop Haus. We have grown our cocktail menu into a beautifully hand-crafted variety of seasonal beverages as well as some classics with our own Hop Haus twist.”

Miller thanked those who made the opening of the Plainville location this year possible.

“Everyone at Hop Haus would like to thank the town of Plainville; the local police and fire Departments, the Chamber of Commerce, and of course our customers who, without their support, Hop Haus would not be possible,” he said. “With more than 60 beer choices both craft and domestic, casual dining, and quality cocktails, we look forward to serving the town of Plainville for years to come.”

Currently, while under 50% capacity, Hop Haus has been offering reservation-only dining in on weekends. Hop Haus is open for both lunch and dinner, with 15% off lunches during the weekday from 11:30 a.m. to 3 p.m. Hop Haus also offers

Miller encouraged those who have yet to stop in to Hop Haus to swing by and enjoy “farm fresh food” and craft beers.

“In addition to craft beers we also have a great selection of domestic beers which are very well-priced so that the average person can enjoy themselves without spending a lot of money,” added Miller.

For more information, including a food and drink menu, visit HopHausCraftBeer.com.