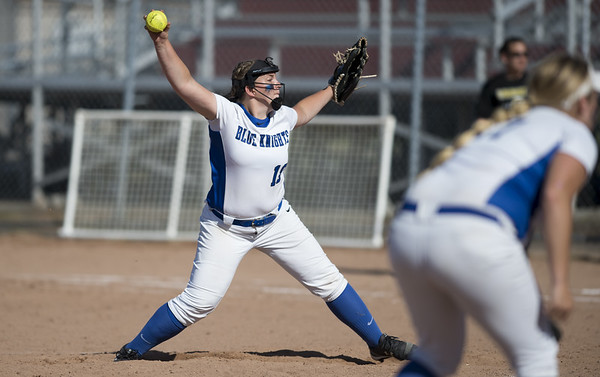 The top-seeded Blue Knights qualified for a record 24th title game appearance after their 8-2 win against No. 5 Hall in the semifinal round, and will meet up with second-seeded Fairfield Ludlowe for a chance to bring home some hardware.

Southington is the defending Class LL champions after beating Norwich Free Academy, 7-6, in 2019, and appear to be in a prime position to repeat, spearheaded by senior pitcher Julia Panarella.

“I think this is probably the most pitching depth that we've had,” Hernandez said. “The level of pitchers that we have I think is incredible. Back in 2019 we also had a very solid pitching staff with six different pitchers in rotation.”

Panarella appeared in the 2019 final and has pitched practically every game this season for Southington, save for a couple late in the season. The hard-throwing righty has solidified her spot atop the Blue Knights rotation.

Most recently, Panarella had a no-hitter going up until the fifth inning in the final four contest against Hall and has not allowed a homerun in any appearance this year.

“I think that's an advantage for us,” Hernandez said. “Especially with the opponent that we're playing does have younger pitchers on the mound. They kind of remind me a lot of us two years ago. Very good team, very well coached, but I hope that experience, especially with Julia being on the mound, throwing in another state championship game, hopefully that will give us an advantage.”

Behind Panarella, Sam Sullivan, Maddie Furniss and Stella Blanchard, who have each proven more than capable options from the rubber.

Southington's offense is nothing to slouch at either as it can string runs together in a hurry. On the season, the Blue Knights have outscored their opponents, 238-34, and have been held to less than five runs just four times.

“The bats have really come alive in the postseason against some really good pitching,” Hernandez said. “It's not like it's just these average pitchers. This is some of the best pitchers Connecticut has ever had collectively as a whole.”

Ludlowe will enter the matchup as the new kids in town as it'll be making its first ever appearance in the state final. However, the Falcons won't be an easy out as they've lost just once this season and claimed the FCIAC title in a close win over St. Joseph's.

“They're here for a reason,” Hernandez said. “Their pitchers do a very good job of keeping hitters off balance and they definitely hit [well]. They're a very well coached team. I watched their semifinal game and I remember saying 'who's their hitting coach' because these kids have really good fundamentals.”

Allie Clark, Caitlyn Romero and Chelsea Villar make up Ludlowe's dangerous trio and Southington hopes to limit their effectiveness as much as possible.

“Our goal is to try and keep it in the park,” Hernandez said. “Julia's goal on a daily basis is to draw ground balls and fly balls.”

A victory would bump the Blue Knights' title game record up to 19-5 as well as earning their first consecutive titles since 2015 when they won three in a row from 2013-15.

First pitch Saturday at Biondi Field is set for 3 p.m.