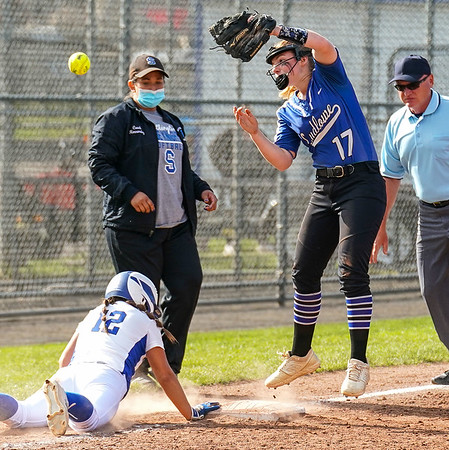 Southington's Ashlyn Desaulniers slides into third base during the bottom of the seventh inning of Saturday's state title game. | Dan Heary Buy this photo

“To be honest, I was actually like crying I was so stressed but as soon as I got into the box that completely went out of my head,” Lasane said. “[I thought] ‘I have to do something for the team, I have to contribute’, and I soon as I got in there I had to be aggressive. The first pitch was there and I just pulled out a single.”

The Blue Knights trailed 3-2 entering the bottom half of the inning, but secured three hits in the frame to snatch the championship from the No. 2 Falcons.

A single from Southington pitcher Julia Panarella started the comeback in the seventh inning, before Alison Rembish and Desaulniers each hit into fielder’s choices, leaving two Blue Knights base runners on with one out.

Lauren Verrilli tied the game with an RBI single, then Sam Rogers hit into another fielder’s choice as Ludlowe secured the second out, but Lasane wasted no time bringing in Desaulniers, smacking the first pitch she saw to serve as the hero for Southington.

“We’ve had some crazy things going on at West Haven, but this game was definitely interesting,” Blue Knights coach Davina Hernandez said. “We knew they were going to put the ball in play. We knew they were a team that wasn’t going to strikeout a lot and we knew that we would have to play defense.”

Southington started the scoring in the first inning as it executed a perfect first-and-third rundown situation that scored Desaulniers to give the home team an early 1-0 lead.

A two-run shot from Chelsea Villar in the fourth inning put the Falcons up 2-1. The Blue Knights knotted the score back up in the fifth on a bizarre play that saw catcher Kaitlynn Griffin score on an illegal pitch from Ludlowe’s Anna Gedacht. There was some confusion on the field as to whether it was a balk call or if timeout was ever called, but the big run still counted for Southington.

“I turned to [Kaitlynn] and I told her ‘go home,’” Hernandez said. “I told her to go. That play is live, you have to let that play finish and technically the play isn’t over if there’s a steal.”

Griffin’s run wound up as a stolen base when it was all said and done.

Ludlowe went back on top, 3-2, during the seventh inning when Della Jackson smoked a RBI triple that reached the left field fence, but the lead was short-lived as the Blue Knights clawed back for their second-straight Class LL championship.

“Back to back, we just had to do it,” Desaulniers, who earned tournament MVP, said. “It feels great right now. I don’t have the words to express how happy I am.”

Jackson led all players with three hits in the contest while Desaulniers finished the bout with two hits, including a long double that rang of the fence in left-center. Panarella also recorded a pair of hits to go along with her win on the mound.

“I was so proud of [Panarella],” Hernandez said. “Julia has always done a good job of staying composed. I think that was something we knew coming into this game was going to be an advantage for us. We’ve been here before, she in particular has been here before on the mound, she’s just been incredible all year.”

“They’re a great hitting team,” Hernandez said. “They chase very few balls off the plate so it made it hard.”

Falcons starter Alex Lewey lasted 4 2/3 innings and scattered three hits for one run and picked up a strikeout while Gedacht gave up four hits for two runs and struck out one.

Until the last inning, Southington struggled making clean contact on the ball as it sent 11 balls into the air for outs.

“We haven’t seen them before and they didn’t disappoint,” Lasane said. “We struggled a little bit but we eventually came back. They gave us a good battle.”

A loss would have halted the Blue Knights’ win streak--which ended at 25 consecutive wins-but the experienced bunch never gave up.

“We never had a doubt in our mind that we wouldn’t come back,” Desaulniers said.