Catherine Shen l Staff Young skiers are learning how to ski at Mt. Southington in Plantsville. Buy this photo Catherine Shen l Staff Ski enthusiasts lining up for the ski lift on a chilly January morning. Buy this photo

Catherine Shen l Staff Doug Smith (right) from Middletown with his daughter, Finley, 5, enjoying the day out at Mt. Southington. Buy this photo

Catherine Shen l Staff It was clear blue skies and people flying down the slopes at Mt. Southington. Buy this photo

Catherine Shen l Staff Skiers from all over the state coming to Mt. Southington to enjoy the snow. Buy this photo 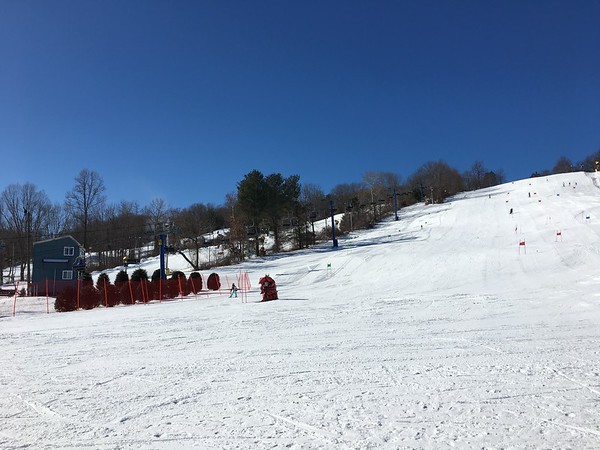 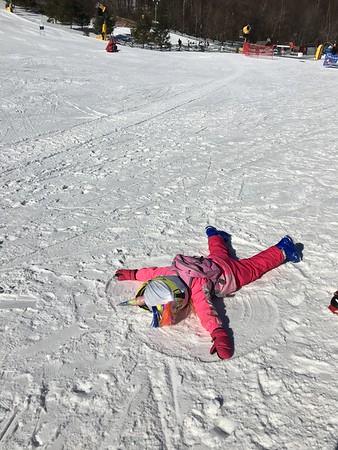 Catherine Shen l Staff Finley Smith, 5, loves making snow angels and said it was one of her favorite things to do in the snow. Buy this photo

There was a definite chill in the air early Saturday morning but that didn‚Äôt stop ski enthusiasts from heading up Mt. Southington and hitting the slopes.

‚ÄúIt‚Äôs just so nice to be outside,‚Äù said Doug Smith from Middletown. ‚ÄúI‚Äôm here with my son, who is on the racing team and my daughter is just learning to ski. It‚Äôs a great little place for kids to just have fun.‚Äù

His daughter, Finley, 5, was decked out with a unicorn ski helmet and agreed with her dad. She was excited to learn how to ski and made snow angels as she waited for her brother. ‚ÄúMy favorite thing about snow is making snow angels,‚Äù she said. ‚ÄúI love snow.‚Äù

The popular ski mountain, located in Plantsville, has been attracting crowds of skiers and snowboarders since mid-December and ticket sales have been steadily selling out since doors opened on Dec. 18. People are encouraged to check out the website at www.mtsouthington.com or call 860-628-0954 prior to their visit.

Visitors are asked to reserve spaces in advance and all social distancing measures and masks will always be mandatory in the base area, at the summit, on the lifts, and inside facilities.

‚ÄúI knew it was going to be busier this year, I just didn‚Äôt think it was going to be this busy,‚Äù said Brian McCloskey, guest services and marketing manager for Mt. Southington. ‚ÄúOne of the major changes we‚Äôve made because of the pandemic was boosting our online ticket sales and that made a huge difference. People are really taking advantage of that.‚Äù

For the seasonal and weather-dependent business, Mt. Southington has been busy welcoming experienced skiers and newcomers, filling up classes and programs, and even night sessions are selling out faster than usual. Having a reduced resort capacity also didn‚Äôt affect the business as much as they thought it would.

‚ÄúPeople are eager to be outside. We‚Äôre even seeing our snowboards selling out and running out of equipment, which has never happened before,‚Äù said McCloskey, who added that seeing how other businesses have been negatively impacted by the pandemic, the experience only humbled them even more.

‚ÄúThe pandemic has really opened our eyes on a lot of things,‚Äù he said. ‚ÄúWe‚Äôre just so grateful for everyone‚Äôs support and we appreciate their business. It‚Äôs been a long time since we‚Äôve seen a busy season like this.‚Äù

Despite a milder winter, because the ski mountain produces artificial snow on their own, they are able to maintain the amount of snow needed to keep up with the heavy use.

‚ÄúWe can resurface the mountain within 12 hours, so we don‚Äôt have to rely on a lot of natural snow or cold temperatures,‚Äù said Monti Montana, social media manager and ski-pro at Mt. Southington. ‚ÄúPeople don‚Äôt realize that we‚Äôre actually not really affected by the weather too much.‚Äù

He created the resort‚Äôs introductory program to ski racing for skiers ages 6 to 16 and said over 80 kids entered to learn how to race, a number that is comparable to a regular year.

‚ÄúWe had to stop registration because we were getting too many kids,‚Äù he said. ‚ÄúIn some way, the pandemic has really helped us because we‚Äôve been sold out and booked out for weeks.‚Äù

Montana credits that trend to the fact that less people are traveling out of state to go skiing and rediscovering that they can get what they want in their own backyard.

‚ÄúConnecticut has some of the best snow and slopes for skiing, so it‚Äôs nice to see people getting a taste of what‚Äôs already here. It‚Äôs also much cheaper to come here too,‚Äù he said.

Encouraging their granddaughter, Avery, 4, to ski, both Ellen and Roger Young from Bethel are grateful and excited that Mt. Southington is open during the pandemic.

‚ÄúIt‚Äôs a little cold out today but the sun is nice,‚Äù said Ellen Young. ‚ÄúPeople are also really good with social distancing and wearing masks, so we feel safe coming here.‚Äù

Having just skied down the hill, both Madison and Charlotte Young, ages 9 and 7 respectively, said they loved being out in the fresh air.

‚ÄúI‚Äôve been staying inside for school and we‚Äôre remote learning, so it feels extra nice to be outside,‚Äù said Madison.

Charlotte agreed. ‚ÄúI love going down the big hills,‚Äù she said. ‚ÄúIt‚Äôs really fun to ski over the bumps and feel the wind. I love skiing.‚Äù